The TuxTAP system — expandable at any time

Our cost–efficient peripherial modules enable you at any time to upgrade your TuxTAP Integra unit with low financial and technical efforts. In the TuxTAP system the number of outputs and inputs is not artificially restricted as it is common in other dispensing systems. With TuxTAP you only buy a second main unit when you need a second display. You can also use the second (or third etc) main units to attach further peripherial modules. This requires only minimal additional effort.

You can just lead the 6–strand bus line (a telephone cord suffices) from any main unit to the first peripherial module and from there to the next module and so on. So that you do not have to create any big cable loops, we provided the Integra main unit with four bus connections. In all 4 directions each segment can take up to several hundred meters. Furthermore the number of modules on one bus and the practical applications are almost unlimited.

With the TuxTAP system you avoid cable bulging of a large number of thick 24V lines as it is common in centralised systems. Power supply of the modules takes place decentrally where valves and contactors have to be controlled or meters have to be read via a local 230/115VAC to 24VAC transformator. Thus it becomes possible to install the TuxTAP Integra 150 on the sales counter, apart from the dispenser, as it is common for cash systems. In addition the control of components in the cooling room, e.g. barrel switches, is thus realisable at low costs.

Another great feature is that the addresses of all bus modules in the TuxTAP system are uniquely setup by factory. This means you do not have to switch any DIP switches or jumpers in order to configure the devices address. The number of potential error sources when installing and expanding the system are thus drastically reduced. All you have to do is plug the new module into the bus, it will be detected automatically. The only thing you have to do is giving it a name so you can tell similar modules apart in the configuration.

The TT peripherial modules are all designed so that an accidental insertion of an adequate plug into an inadequate position does not destroy the module. We have clearly defined the plug connections. Thus you can guess from the form of the plug which function it will have in the TuxTAP system. Furthermore the modules, predestinated for this reason, have a number of status LEDs, which facilitate the configuration of the system, as well as troubleshooting in case something does not work as it is supposed to.

We already offer these peripherial modules: 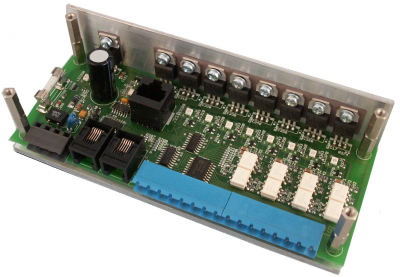 The ASOL module permits the connection of eight 24VAC electromagnetic valves or contactors.

With the ASOL module you can control up to 8 solenoid valves or contactors with 24VAC nominal voltage of the inductors.

On the middle of the module, 2 bus connections are located with which you can connect the modules among each other and with the respective main unit. Just plug the bus cable with its RJ–12 connector there and then the next cable section is drawn from the second socket to the next module. A red/green LED shows if the module is detected by the main unit. Thus a cabling mistake or cable break of the bus line can be detected easily. If the detection by the main unit fails e.g. due to its breakdown (damages through lightning stroke etc) tapping is still possible on emergency operation as long as or as soon as there is electricity available.

The energy supply for the module and the valves rightside are provided by 2 coupled 24VAC connectors with combined screw-and-plug terminals in 1/5" raster size. During the installation you have the possibility to let the thick 24VAC power supply lines from the transformer end on the module and draw a connection line from the second plug terminal to the next module. And so on and on.. Thus the modules can be be exchanged quickly without endless screwing and at the same time the ends of the cables are always insulated properly against short-circuit. A red/green LED shows whether the module is supplied with power and whether the integrated microfuse, which secures the valve outputs against over-current, was triggered.

The valve outputs, carried out as 1/5" screw-and-plug terminals as well, all have a return line of their own. That prevents any cabling mess on the ground terminals as it is often the case with other dispensing systems where most manufacturers save on the wrong end. Furthermore every valve can be individually plugged and unplugged without tools when necessary. The outputs feature a zero-voltage switch which prevents high in-rush loads. Thus the valves reliably activate using relatively thin, long cables and a small 24V transformer. A red/green LED shows the switching status — additionally cable break and burnt-out valve coils can be detected in switched-off status. Short-cicuit of a valve coil can be detected by looking for the fuse LED on the ASOL board. The semiconductor switches are dimensioned that way they withstand overcurrent to the extent the fuse allows.

E.g. eight flow meters and eight sensors for low alarm or foam probes can be attached to the AFRM-module.

You can attach to our flow rate meter modules with its 16 digital inputs up to 8 flow rate meters with foam probes or alternatively barrel-empty detectors.

The activation is carried out over the bus line, as in the ASOL-module, and a red/green LED shows as well if the module is recognised by the main unit. The AFRM module features 8 inputs for flow rate meters (BFRM and CFRM: 4 inputs) which detect signals of an attached pulse generator up to a speed of 100000 impulses per second. This speed is not achieved by any other dispensing system. The current state of the 16 inputs is individually displayed over a red/green LED (pulse generator: green; foam probe/empty barrel detector: red). So you can quickly check with only one look if the meter is jammed or the detector does not work properly anymore. Certainly, this function is also useful for checking the cabling of your system. In case, you do not need all of the flow rate meter inputs, you can alternatively attach simple switches.

The inputs for one pulse generator with integrated foam probe or a pair of pulse generators and barrel-empty detectors each are combined altogether with power supply and ground on a 5 pin socket for screw and plug terminals. Optionally you can plug in a combined terminal for a pulse generator with foam probe or two separated 3 and 2 pin terminals for separated sensors. In both cases there will be no cable mess as it is so common in other computerised dispensing systems. Additionally, every sensor can be connected and disconnected without tools.

The power supply of the modules and the connected pulse generators and detectors is given solely over one of the two 24V connections. The supply voltage of the attached pulse generator can be adjusted to 5V, 10V, 15V and 20V on the module's short-cirucit-proof voltage regulator. Power supply and short-circuit are signalised by another red/green LED. 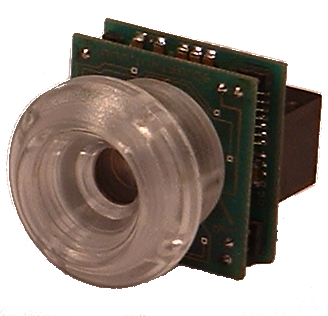 The IKEY module is an “Addimat” waiter lock with multi-coloured LEDs for signal purposes.

We enhanced the well known “Addimat” waiter lock with a useful function: our IKEY module includes 12 bright signal LEDs that are arranged 3 LEDs a group to illuminate the transparent Addimat lock for 4 different signals. The LEDs can blink in different tact thus waiters with a poor eye sight for colours have no problems.

A possible application for the different signalling is the allocation of tapping heads to a certain waiter lock. This is useful when several waiters tap on one counter. For this purpose coloured signal LEDs are installed at the tap. If the lock glows green when the first key is inserted, for example, the waiter can tap at every tap. Their green LEDs are no lit up as well. If a second waiter inserts his key on the other end of the counter into the lock there, the signal LEDs change on part of the taps to the colour orange. Here the second waiter enters his order. Where the division is going to take place you can decide for yourself.

You can use this module expediently whenever you want to replace the already existing tapping heads through those with portioning valves. In this case the installation of flow meters in the beverage line is unnecessary since the TuxTAP Integra controls the amount of beverages over a preset timer. The ABTN module comes along with 8 verifiable portioning buttons with metal snap discs for one or several beverage lines and one LED per button with which their activation is indicated. Additionally there are 4 LEDs in different colours for the allocation of the key panel to the IKEY lock that lights in the same colour. These LEDs can also blink in different tact.

By connecting an ABTN module and an ASOL module by another 8-strand cable, a purely hardware driven fail-over dispensing is possible. This allows you to still serve drinks when the main unit is broken.

We can offer this special module from summer 2009. The TuxTAP® UniLink is an independent, small computer based on Linux as well. In the TuxTAP system, it serves the adaption of interfaces and protocols between external devices (coffee machines, weighing sets etc) and the TuxTAP system. You can attach, for example, a so called “parallel” coffee machine, which can be controlled with the TuxTAP system just as easy as one with E-protocol. On the other side an Ethernet or WLAN connection is used to communicate in the TuxTAP protocol. You can control with every Tux TAP UniLink a greater number of external devices. In principal, the TuxTAP Integra could take over this task itself but unfortunately, most of the external protocols are very communication intensive. A direct processing of the Tux TAP Integra side would cause crucial loss of speed because of the POS and dispensing system functions. Furthermore, the TuxTAP UniLink is very small and is connected via Ethernet or WLAN. Thus, it can even be incorporated into a coffee machine of an third party manufacturer to equip them with a modern network connection. Thus, it is easily integrated into the TuxTAP system.

As the unit is still in the planning phase, we cannot reveal any further details. But we are certainly willing to offer the TuxTAP UniLink at a lower price than the upgrade sets with which some manufacturers expand their “parallel”: coffee machines only by the E-protocol per RS232.

TuxTAP® is a registered trade mark of TuxTAP Ltd., München.